I really enjoyed the week with our English in Action teachers, Jane and Andrew.
When I first heard that school would end at 2.p.m every day I thought that was too long, but we had so much fun, so I forgot the time!
Both of our teachers were really cool and nice.
We also played some fun games.
I think our presentation at the end of the week was really cool.
English in Action was a great experience for all of us and I would love to do it again! (Rosa Mitterhauser-Weber, 4A)

We, the 4a, had an English project, called English in Action. It was in September and it lasted one week. Our teachers Andrew and Jane taught us English six hours a day. We also did two projects in two different groups, which we presented on Friday.
Andrew and Jane were native speakers and so we trained our English while speaking with them. Most of the themes were a lot of fun, but some were also a bit boring.
Jane was cool, but not very relaxed, compared to Andrew, who was a bit older, but a kind and patient teacher. We think this week helped us to improve our English and to extend our vocabulary. (Marlene Stöger & Katja Malischnig, 4A)

I really liked our “English in Action“ week. I learned lots of things about the UK that I haven’t known before, especially about the cities and countries in the United Kingdom. Our two teachers, Jane and Andrew, were both very nice. Andrew taught us more about the geography of the UK. He also spoke about food and about things that you can visit there. He explained very well and was very funny. Jane played games with us. She not only helped us with the organisation but also with the presentation we had on Friday. Sometimes the teachers were strict, but without strict teachers we would not have been able to learn things. The “English in Action“ week was a lot of fun and I learned a lot. (Serena D. 4A)

In our school there was an English project from September 15th till September 19th. During these five days we had two teachers from a company called “English in Action”. We had one teacher for 3 lessons a day and the other one also for 3 lessons. During the lessons we did some exercises in our books and in one lesson we prepared a project and a show. We presented both of them on the last day. You can learn a lot when you are speaking English the whole day long, but after 6 lessons of English you are really tired. I think it would have been better to only have five lessons a day because that way you can learn more easily. But otherwise it was a lot of fun and I learned a lot. (Paul Rössler 4A)

Before the “English-in-Action week“ started I was very sceptic whether a week of only speaking English would be funny. But other classes had done this project before and were very excited so I decided to give it a try. Furthermore, the whole class couldn’t take part if I refused.
In our first lesson my group got Ben as teacher and at this time I didn’t like him much but after a time that changed. It was easier to understood the things Ben and the others spoke than to speak myself. I noticed that I have to increase my range of vocabulary because I lack a lot of it.
Our teachers switched groups every lesson and that was good because I liked our second teacher Lynnette more than Ben. She played more funny games with us and the time went by faster when she taught us. The others told me that Tuesday was the funniest day of the week and exactly on this day I stayed at home because I felt ill. I’m very unhappy about that.
Our presentation was great fun. The “English-in-Action week” was a great experience! (Ronja 4C)

This September we had five days of “English in Action”. In these five days we learned a lot. The best method to learn English is to do all things in English. Speak, read and dream in English! A cool thing was that the teachers didn’t understand you when you were talking to your neighbours in German. I learned a lot this week so I think it’s a great way of teaching pupils English. Another good thing was that mobile phones were allowed.
We had two native speakers this week. One of them was Ben, he was serious and I learned a lot from him. He wore glasses and had black hair. Lynette was our second native and she was really funny. In her lessons we played games and one time we ate potato crisps. It was great that we didn’t have to do any homework, so our afternoons were a lot better than usual. Ben had some challenges for us, they were really difficult. Once we had to search London subway stations on a map. It took us an hour to find fifteen underground stations.
At the end of the week we all presented shows to each other’s classes. Many of them were funny and exciting. I hope we will have another “English in Action” week in the fifth grade. (Jason 4C)

Last week we had “English in Action”. I enjoyed it very much. Our teachers, Lynette and Ben, were really nice and very good at explaining things.
In our first lesson we had Ben. At first he wasn’t really that friendly and we weren’t happy to have him as our teacher. But at the end of the week he was much more relaxed and working with him was great fun.
Lynette was very cool. I liked her from the beginning. She was very friendly and she always told funny jokes. We also played at lot of games like „Werewolf“ and „Hurricane“. I really enjoyed it!
Our show was probably the best part of the whole week. Niko and I acted a short made-up scene from „Sherlock“. Writing the script was very funny and I also enjoyed acting it out. I think Niko and I would be perfect Sherlock Holmes’ and Dr. Watsons. 🙂
I also think that my English skills are much better now. I accent is more British now and it’s easier for me to make logical sentences.
Actually there’s nothing I didn’t like about „English and Action“. I think it was a great experience and I would definitely do it again. (Aleyna 4C) 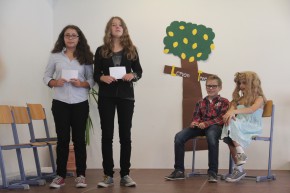 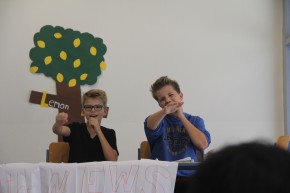 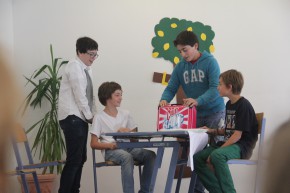 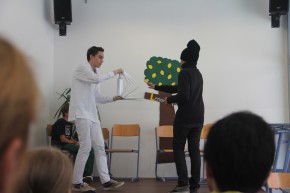 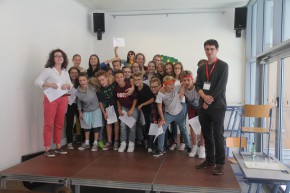 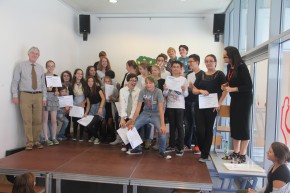 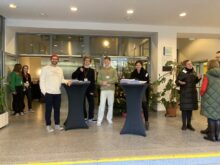